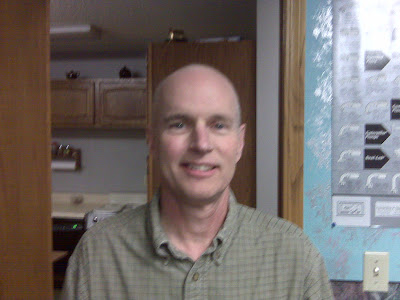 This is the "new" Jim! Looks pretty good doesn't he? The concensus is that he is a pretty good-looking bald guy!


Everyday last week he was losing big bunches of hair and he was looking a bit "odd". Plus he was tired of cleaning up his pillow each day and cleaning out the shower. The loss had become pretty dramatic. So on Friday he said he was ready to "buzz it". We didn't shave it. We used a razor with a #1 guard on it. I've never used one before but Jim assured me there was nothing to mess up!


Enough with hair. I'm sure you want to know how he is doing 6 days post-chemo #2. The answer is...just fine. He has a couple things going on, none of which are serious. The first thing is difficulty getting a good night's rest. He noticed this after chemo #1 also, so this may be something he needs to expect during that first week after chemo. We think it is because of all the fluids that were put into him during the treatment. We think that they are just working their way out of his body. So...that means getting up several times each night to use the bathroom. We also think the Predisone that he takes for 5 days after each treatment has him "rev'd" up to the point that he doesn't get into a deep sleep. Predisone is a steriod. It tastes awful and Jim is always glad when the fifth day comes and goes and he can quit taking it. One of the other things that he is noticing is heart burn. Not terrible. But enough that it woke him up last night and he took some Tums. Which did help. He is feeling some of the heartburn again tonight. This didn't happen last time, but we have a friend that went thru chemo a few years back and she said that she had lots of heartburn issues. Hopefully that won't be the case for Jim. He has been feeling a little tired and took naps both yesterday and today. But overall he is feeling pretty good. The reduction in pain in his hip has given him more mobility. He took care of his mom's trash and recycling this week which is major. He hated having me do "his" job over the last several weeks, but he just wasn't physically up to it till now. I'm not discounting the possibility that as the chemo treatments continue that I may have to take care of those tasks again. I'm willing...he just better not get used to it!

I'm probably telling you more then you want to know, but my posting has become my journal so to speak. By stating specifics we are able to go back and accurately compare the details from one treatment to the next.

I want to leave you with this thought (author unknown): GOD didn't promise days without pain, laughter without sorrow, sun without rain, but he did promise strength for the day, comfort for the tears, and light for the way.

Please continue praying for minimal side effects from the chemo! Thanks so much!!!

Good looking hair cut, keep up the blog good to see things going well and I know its a good realse for you too Terri Maybe see you at Ktelsens on the 30th Deb Krall