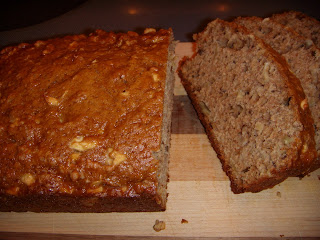 I was given a bunch of apples from my boss at work last week.  The apples were NOT pretty - big green spotty apples.  But the way they looked didn't matter.  I knew from past experience that these were great baking apples.  So my task at hand was to find a new apple bread recipe that wouldn't be so bad for us.  In my Taste of Home Healthy Cooking Annual Recipes 2010, I found just what I was looking for.  But of course, I had to tweek it a little bit!  The end result was delicious.  Not too sweet, but very tasty.


Directions
In a large bowl, combine the first 8 ingredients.  In another bowl, whisk the eggs, applesauce, oil and vanilla.  Stir into dry ingredients just until moistened.  Fold in apples and nuts.  Transfer to two 8-in x 4-in loaf pans coated with cooking spray.


If using the topping, combine the flour, sugar and nuts; cut in butter until crumbly.  Sprinkle over batter.


Bake at 350 degrees for 45-55 minutes or until a toothpick inserted near the center comes out clean.  Cool for 10 minutes before removing from pans to wire racks.

Have you ever wondered what sweet bread would be like without the "sweet"?  I can't say that I ever wondered, but I thought I'd share my goof-up.  I had made my first batch and it turned out beautifully.  The picture above was from that first batch.  I had more apples so I made a second batch.  Well, it did not do as well.  Before I ever put it in the oven, I knew it didn't look right but I put it in the oven anyways.  I took it out later and what a disappointment!  Here is the comparison: 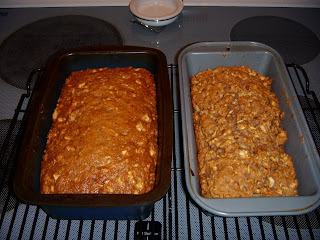 In case you can't tell, the one on the right looked bad and because I felt compelled to find out if it could be salvaged - I tasted it.  YUCK!  I went over the recipe in my mind trying to figure out what I left out and suddenly I realized it was the sugar.  Well, those two loaves went into the trash.  What a waste!  But live and learn!