I'm a little tardy in getting this done but late is better then not at all, right?  Two weeks ago I ran in my very first quarter marathon in Madison WI.  I've been preparing for this race for quite some time.  And this was an instance in which I flew solo.  My sister Patty and daughter Becca were both running the half marathon so our start times and locations were different from each other.  Rachelle tells me that a race report is important if for no reason other then to document what worked and what didn't.  No reason to make the same mistake twice.

First of all, was I ready?  Yes, definitely.  In the 4-6 weeks prior to the race I had ran distances of 6-7 miles on several occasions.  So knowing I could do it was not an issue.  I've continued to suffer with plantar fasciitis in my left heel over the last 6 months.  The more often I run the more it hurts, so I had cut back to twice a week.  That seemed to allow enough down time to recover between runs.  Why don't I see a doctor about it you may ask?  Because I don't want him to tell me to stop running.  It is something that I can deal with.  It doesn't get worse, it just continues to be a nagging problem.  I don't want to stop running.  So anyways, yes I had the distance training in although I may not have logged all the miles that I should have.  I was ready for the race.

We got up very early that morning, had our coffee and ate our small breakfast and off to the race site about an hour before it started (6:00).  We scoped out the starting lines and restrooms and made several pit stops.  The surprise was how warm and muggy it got before the race was over.  Patty and Becca's race started at 7:20 and mine didn't start till 7:40.

The quarter marathon race was very scenic and nice for the majority of it.  I actually felt like I had a good pace.  (I was wearing Rachelle's Garmin watch so I was able to see my paces and my heart rate as I raced.)  The water points were well placed and there were plenty of volunteers.  So everything was good right?  It was....till I hit the sign that said 6 miles.  I had another .55 miles to go and a big hill to climb.  I resorted to walking up that hill.  I felt like I had nothing left!  I hated to do it.  I hadn't walked a race since my very first one but I knew that if I was going to finish the race running I had to get a quick recovery in.  So I walked up that hill, knowing that my time was going to suffer, but oh well!  At the top of the hill there was a right turn, another short block, another turn and then the finish line.  I started running and ran the rest of the way in.  I finished at 1:15 for the 6 miles and 1:33 for the quarter marathon. 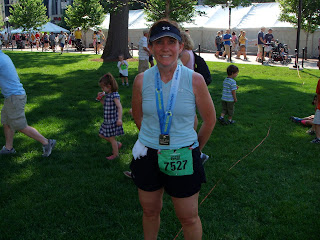 Would I do it again?  Not sure.  If I do, it won't be for quite awhile.  At this point in the game, I've determined that I don't like the longer distances.  I want to improve my speed on the 5K and start doing better there.  The last two weeks I've started running three times a week again and I'm incorporating some sprints into each one.  On the alternate days I'm doing strength/stretching exercises.  Time will tell....
Posted by Terri at 8:55 PM