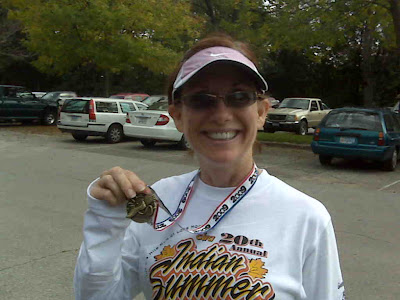 My third race of the season was held at Lake MacBride State Park on 9/26/09. It was my first trail run and my first four mile distance. The first two were 5K, so I had set the bar a little higher! And miracle among miracles, I did not only finish, but I placed. First place in my W50-59 age category. When they called me up for the medal I was in a state of disbelief! I turned to all who were spectating and announced, "First 4 miles EVER, first season running!". Can you tell I was a little proud?

FYI - there were four women in my age category. My time was 40:52, my pace was 10:13. The hills were unbelievable! There were several hills and the course was quite challenging. But I finished and I did well!

My running partners, daughter Becca and sister Patty also competed. Each is in different age categories and each is much faster then me. I was the only one that walked away with a medal but each of them had set new best times for themselves.
I find it interesting that as I've trained this year (starting in May) and slowly built myself up into this running machine (NOT), I've learned some things about myself. First, I am capable of doing things that are bigger and greater then when I was younger. I ran when I was in the Air Force, but 2 miles had been my top distance. Here I am 25 years later surpassing that distance. Does this mean I am in better physical shape then I was 25 years ago? Maybe. Secondly, I've learned that my daughters can teach me a few things. They are very smart and very inspiring. They both work so hard at what they do, professionally and athletically. They are unrelenting in their quest for improvement. Wanting to be faster and more efficient... Finally, I have learned to consistently challenge myself. I don't want to become complacent. There is no telling where I will go from here......
The next race is on October 11th, the Especially for You race against breast cancer.
Posted by Terri at 11:43 AM