I usually have a plan when I make a meal. Today I needed to accomplish two things. First I had to have something that I could put together ahead of time and not have to mess with till just before eating time. Secondly, I needed some mashed potatoes to use in my kolaches that I'm mixing up tonight. I normally use instant mashed potatoes but decided to go with the real thing this time.


Dinner was to be served around noon so at 8:30 I started on the main course - the Swiss Steak. I had seasoned it with garlic pepper (which I use on everything I can) last night so it was in the fridge ready to go. I dredged it in flour (with more garlic pepper) and browned both sides in my electric skillet. I was doubling the recipe so I had to brown the meat in batches. While the meat was browning I put baby carrots in the bottom of my pan, laid the meat on top as it came out of the skillet and the scattered the sliced onions all over the top. After pouring the water/Worcestershire sauce over everthing, into the oven it went for 3 hours. Hubby peeled, cleaned and cut up the potatoes so they were ready to turn on at 11. 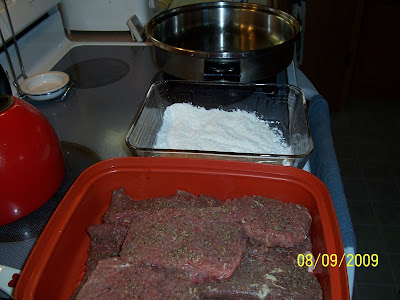 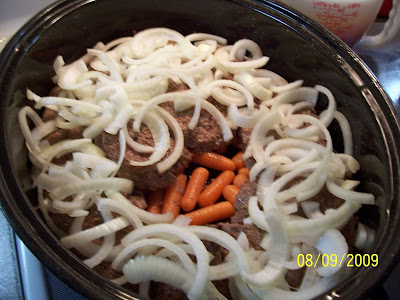 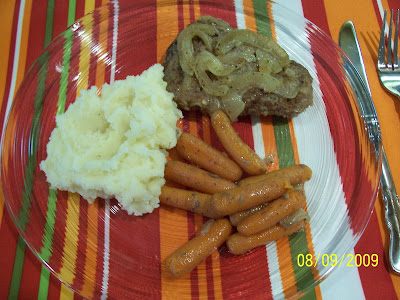 Sunday dinner isn't complete without dessert. Unlike the Swiss Steak recipe which is tried and true (many times over), I opted to try something new for dessert today. I had picked up Taste of Home - Potluck, which was new on the newstands. This dessert was to be made in the slow cooker and it had only four ingredients. The recipe called for using cherry or apple pie filling, but because I had 5 cans of blueberry pie filling in my cupboard I decided to go that route. I'm giving you the recipe exactly as it was printed with my variation following. 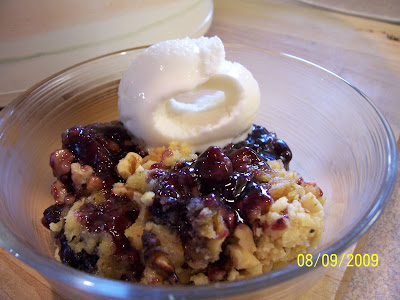 Here are the recipes:
So Tender Swiss Steak
From Taste of Home, Annual Recipes (2000)

In a shallow bowl, combine flour, salt and pepper. Dredge steak, a few pieces at a time. Pound with a mallet to tenderize. In a Dutch oven, brown steak in oil on all sides. Arrange onion slices between layers of meat. Add water and Worcestershire sauce. Cover and bake at 325 degrees for 2 to 2-1/2 hours or until meat is very tender. Remove to a serving platter and keep warm. In a small bowl, combine flour, salt, pepper and broth until smooth; stir into the pan juices. Bring to a boil over medium heat; cook and stir for 2 minutes. Serve steak and gravy over noodles or mashed potatoes if desired. Yield: 8 servings

My variation – I use minute steak (cheaper grade but already tenderized). I cut the onion into thick slices so I know when I’m eating them.

I put carrots in the bottom of the pan, cover with the browned meat, arrange the onion slices and then bake. I wanted a longer baking time of 3 hours so I reduced my temp to 300 degrees.

Slow Cooker Cobbler - the official name in the magazine - Minister’s Delight
So named by the contributor because it originated from a minister’s wife who was said to fix it every Sunday.

Place pie filling in a 1-1/2 qt. slow cooker. Combine cake mix and butter (mixture will be crumbly); sprinkle over filling. Sprinkle walnuts if desired. Cover and cook on low for 2-3 hours. Serve in bowls.

Variations:
I used blueberry pie filling as I stated earlier. And because I always try to make things a “little bit” healthier I used Smart Balance instead of butter. I used more then the 1/3 cup walnuts – as I’ve always believed the nuttier then better! I served it warm with vanilla yogurt ice cream. Very easy and everyone enjoyed it a lot!
Posted by Terri at 3:07 PM