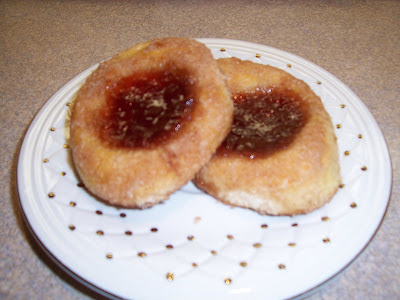 This past week we had our monthly potluck at work. Since hubby and I work together we have a period of months that we have to take 2 items. This month I was responsible for the breakfast and hubby was responsible for the entree. I didn't get any pics of the meatloaf that I made but I'm going to share that recipe also because it is very much a winner! I made two things for our breakfast, one sweet and one savory. Both were super easy, new recipes that I got out of Taste of Home's 5-Ingredient Cookbook. The first one that I'm going to share is the Cinnamon Fruit Biscuits. If you didn't want to spend alot of money but wanted to take something that will go over big - - this would be the ticket! This recipe definitely goes into the "keeper" recipe file!

In a small bowl, combine the sugar and cinnamon. Dip top and sides of biscuits in butter, then in cinnamon-sugar. Place on ungreased baking sheets. With the end of a wooden spoon handle, make a deep indentation in the center of each biscuit; fill with 1 teaspoon of preserves.

Bake at 375 degrees for 15-18 minutes or until golden brown. Cool for 15 minutes before serving (preserves will be hot). Yield: 10 servings 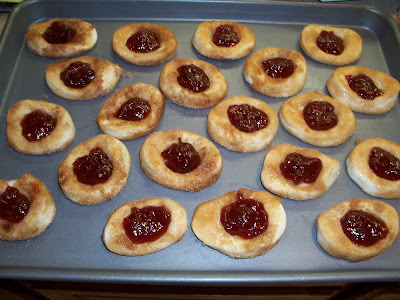 This is a picture of the biscuits before they went into the oven. Instead of using a wooden spoon handle I used the following kitchen tool. It made the indentation larger. (I used the smaller of the two ends.) 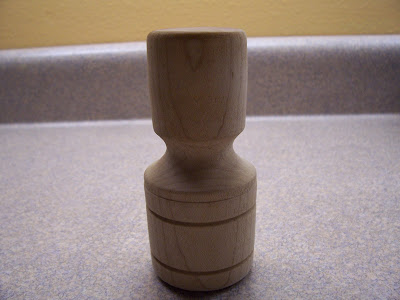 Here is a pic after they came out of the oven. They look like little kolaches don't they? But they definitely don't taste like kolaches. Much sweeter due to the sugar cinnamon coating. Feel free to change up the preserves based on personal taste. 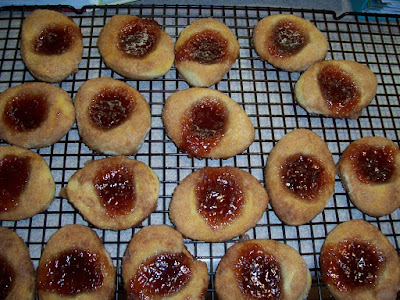 These went over very well. I quadrupled the recipe so the guys at work could have a couple apiece. They taste best the first day, but are still eatable on the day after!
Posted by Terri at 1:47 PM